ECFA (The Estonian Cultural Foundation in Australia) is pleased to announce the following funding for projects enhancing Estonian culture, language and heritage across Australia. 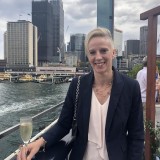